The beautiful [empty] clinic that God-willing will soon be a casa materna!

In these past few weeks I have come to love the people of San Juan and the surrounding communities. Lesbia and her family (husband Juan, daughters Elena (17), Oneida (16), and Cana (11) have welcomed me into their family and so kindly taken care of me. San Juan is one of many little towns on Lake Atitlán, situated deep in the beautiful mountains, which on many days jut out high above the clouds.

Besides learning much about the culture here and learning to make tamales and tortillas (though I am far from perfecting this skill!), Lesbia and I and the people we are working with have made much progress with the casa materna project (see last section of my last post for background info). This beautiful clinic that was built by an organization in Spain has never opened because the community does not have the funds to staff it and keep it running.
The people of these communities and their local representatives of San Juan and its three villages, Palestina, Panyebar, and Pasaquim, all have shown huge support and gratitude for those who are making this casa a reality.

It has been encouraging for me to be a part of meeting with these people and hearing their thoughts about this project. During our second to last meeting, one of the younger representatives told us of the terrible experience he and his wife had a year and a half ago when their baby was born. He excitedly told us that now in the future he is going to have another baby with the implementation of the casa!

The next months will be exciting as Erica organizes training teams to come down and they prepare to staff the casa. We are praying for many saved and many changed lives in this region of Guatemala and beyond.

While here on this casa materna project, I have been working alongside Lesbia doing prenatal house visits and also in the clinic she works at two days a week (Clinica San Juanerita). We’ve had 3 births in the month that I’ve been here; the first one was due to be born at the house, but after hard labor all day with no progression, the poor young first-time mama was worn out and wouldn’t work with us anymore. We took her to the local centro de salud (health center) as the only other option. The doctor there saw that the baby was ready to be born, but told us that if it isn’t born in two pushes she’ll have to send us to the hospital (closest hospital is 2 hours away in Sololá) because the baby was beginning to go into distress and they are not equipped for emergencies (much less fully equipped for a normal birth). We are very thankful that the baby was born within minutes with no complications- it is by the grace of God. The baby most likely would not have survived had we gone to the hospital. A little girl of 6 pounds, 6 ounces! 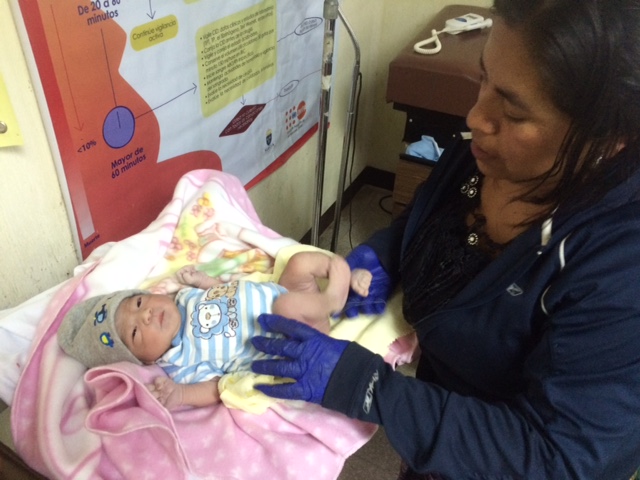 With Lesbia, just minutes old in the centro de salud

The second birth that was due to happen was not happening- it was seven days past her due date and she wasn’t going into labor. When this happens, Lesbia sends them to the hospital to be induced. Paying for transportation is usually and issue for families here, and was an issue in this case so I am thankful that I was able to help them get there. Lesbia and I left with them at 5am to arrive by 7am. They were supposed to induce her that morning, but by that evening she was still only two centimeters dilated. Her poor husband had no where to stay that night (families are not allowed in the hospital rooms). We were wondering how long they would let her go before they increased her induction medicine. We found out early the next morning that at 3am a baby boy of 8 pounds 6 ounces was finally born- and they did not end up with a C-section! Although they still hadn’t permitted the father into the room when he called us hours after the delivery, we were very thankful for this news of the birth. By 2pm that day they were on their way back to San Juan.

Visiting after arriving home from the hospital 4 days prior

The third birth came more quickly than expected. It was still two weeks before the mother’s due date, but after dinner we heard that she was having regular contractions so we went to check on her progress and see how the baby was doing. We didn’t expect her to go into full labor upon our arriving, so I wasn’t prepared to stay for the long haul. Lesbia had all her equipment with her as she is always prepared for anything. Around 11pm she told me to rest so that I would be ready when the baby came. At 1am she woke me and it was evident that the baby was ready. This poor young first-time mama was just worn out (which is a theme here!) but with our strong encouragement she managed to push out a baby boy before 2am! He was healthy in appearance and began crying right away, but the mother began to hemorrhage profusely. I quickly helped Lesbia prepare two oxytocin injections which she administered immediately, but the mom kept bleeding. As I massaged her uterus and the grandmother kept giving her gatorade, Lesbia called out for someone to call a tuk tuk (taxi) immediately because we needed more oxytocin and we had none. We were praying for God’s grace to intervene and we hoped that we had enough time to get to the San Juan centro de salud (health center) by the time a tuk tuk arrived (in the middle of the night they are unreliable). By the time the tuk tuk got there, her bleeding has lessened and soon it stopped. We told the tuk tuk to stay in case she were to start bleeding again. Thankfully she never lost consciousness and didn’t bleed again. Baby boy of about 7 pounds began nursing right away, and around 3:30am everyone was hot and ready to sleep!

Seeing first-hand the birth experiences of the women in this area of Guatemala makes me all the more thankful for this casa caterna to be implemented.
I thank each of you who are praying for the people of Guatemala and those who will be impacted by the implementation of the casa. We pray for God’s will to be done above all else.